A-prefixing is a phenomenon where a prefix, a-, attaches to a verbal form with the suffix -ing, as in the following Appalachian English examples from Wolfram (1976):

In examples containing a-prefixing, the progressive suffix -ing is often spelled as -in’ to reflect a sound change from <ng> (as in sing) to <n> (as in sin). 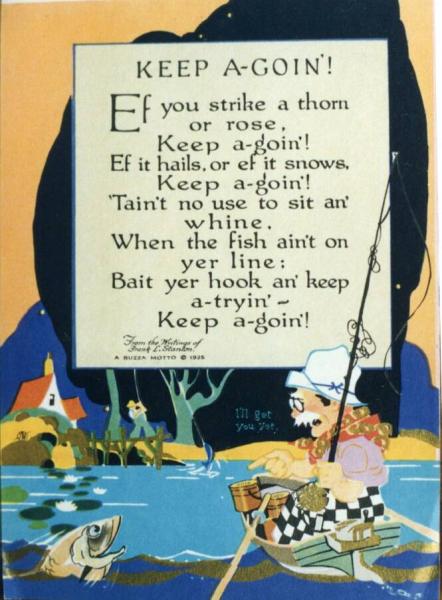 Studies of a-prefixing have focused on predominantly white speech communities. As such, it is unclear whether a-prefixing is used by speakers of other ethnicities. Within white speech communities, a-prefixing is found in Southern American White English (Stewart 1972; Hackenberg 1973; Wolfram & Christian 1976; Wolfram 1976; Feagin 1979; Wolfram 1988), specifically in Alabama, West Virginia and east Tennessee. Feagin (1979, p.116) mentions attestations from across the United States, starting as early as 1846 (taken from Atwood 1953, Allen 1975, Wentworth 1944) and points out that Wright (1898) observed a-prefixing in varieties spoken in Scotland, Ireland and parts of England. Montgomery (2009) argues that a-prefixing in Appalachian English originated from the speech of settlers from southern England.

In some varieties, the form is less common in the speech of younger individuals. A study conducted by Christian et al. (1988) found that a-prefixing in Ozark English is not used by individuals under 15 years old whereas in Appalachian English, a-prefixing is used by speakers of all ages.

The most common environment for a-prefixing is with the -ing suffix, indicating that the verb is in the progressive — it describes a continuous action. A-prefixing can even occur with gonna (a form of going + to) for some speakers, as in (2), though Christian et al. (1988) point out that it only does so in the speech of older individuals:

c. He'll forget to spit and he'll cut and it'll just be a-runnin', a-drippin' off his chin when he gets  to catch them.
(Appalachian English; Christian et al. 1988)

A-prefixing is not compatible with nominal forms such as gerunds (nouns formed with the -ing suffix), as indicated by the fact that the following sentences are judged to be ill-formed:

A-prefixing is also not compatible with adjectives containing the -ing suffix, as indicated by the illformedness of the sentences in (5):

b. *The movie was a-charmin'.
(Appalachian and Ozark English; Christian et al. 1988)

A-prefixing does not occur with the object of a preposition, as shown by the illformedness of (6):

b. *He makes money by a-buildin' houses.
(Appalachian English; Wolfram 1976)

Note that, in the absence of a preposition, the corresponding sentences are grammatical, as shown in (7):

In coordinated prepositional phrases, however, a-prefixing may occur on the second conjunct, as in (8):

b. He got sick from workin' and a-tryin' too hard.
(Appalachian and Ozark English; Christian et al. 1988)

See also the discussion of prepositional phrases in Lázaro (2018).

A-prefixing is not restricted to affirmative contexts. It can also occur in negative sentences and questions. In Christian et al.’s (1988) study, they asked native speakers to choose between two sentences based on which they preferred. The choice between the assertion in (9a) and the negative sentence in (9b) was not statistically significant:

Similarly, the assertion in (10a) and the question in (10b) were said to be equally well-formed:

Some researchers have suggested that there is "no formal evidence for a distinct semantic category" for a-prefixing (Wolfram 1976, Montgomery 2009). Others have suggested that a-prefixing has special conversational uses (it is "discourse-related")(Feagin 1979, Christian et al. 1988). Feagin (1979) and Frazer (1990) describe the prefixed present participle as conveying "immediacy or dramatic vividness," and views it as a stylistic device that adds color and immediacy to a story. Both Christian et al. (1988) and Frazer (1990) also suggest that a-prefixing could be a "stylistic indicator of vernacular style" based on the fact that two-thirds of their examples containing a-prefixing arose in narrative discourse within their interviews. They also propose that a-prefixing has a "stylistic function of intensity" because native speakers preferred sentence (11a) (a sentence containing an intensifying adverb) over (11b) (a sentence containing a minimizing adverb):

b. #He was only a-starin' at the picture.

However, the choice between the pair of sentences in (12) was not statistically significant despite the fact that (12a) contains an intensifying verb and (12b) a more neutral verb:

b. I heard him a-talkin' about taxes.

A-prefixing occurs with verbs that bear stress on the initial syllable, as in (13). Stress in these examples is indicated by upper case letters:

However, a-prefixing does not occur with verbs that bear stress on a syllable other than the first one. Thus, (14a) and (14b) would be judged to be ill-formed:

b. I can remember Dad a-reLAting the fire to me.

c. They didn't think they was enough that they could function as a church, so I told 'em they  could, got 'em a-beLIEving they could.

A-prefixing may also occur on compound verbs, which have two primary stressed syllables. The prefix attaches to the first element of the compound, as in (16):

b. Way back I guess forty years ago, there was a crowd of us going up Deep Creek a-deer-driving.
(Smoky Mountain English; Montgomery 2009)

c. The dogs lit across the mountain and went into Tennessee. [We] didn’t do no good a-bear-hunting.
(Smoky Mountain English; Montgomery 2009)

A-prefixing is typically assumed not to occur with verbs that begin with a vowel. For example, the following sentences would be ill-formed:

Feagin (1979) provides a single example from her corpus of Alabama English of a-prefixing occurring on a word beginning in a vowel, which is reproduced in (18).

Montgomery (2009) finds many more instances of a-prefixing on verbs beginning with a vowel in his Smoky Mountain English corpus, two of which are reproduced in (19):

b. I noticed two older girls a-eating something out of a little syrup bucket.
(Smoky Mountain English; Montgomery 2009)

The author points out that sequential vowels occur in Smoky Mountain English when the indefinite article precedes nouns beginning in a vowel, such as a axe, a ear of corn, a uncle, or a address. These observations suggest that the compatibility or incompatibility of a-prefixing with vowel-initial words is not a property of a-prefixing but a more general property of the grammar of a speaker.

Christian et al. (1988, p.58-9) argue that the a- prefix is still a preposition in contemporary Appalachian English.

The line "Where are the plumbers, who went a-missing here on Monday?" occurs in the song "Coffee Homeground" by Kate Bush (1978), and the Christmas carol "The Twelve Days of Christmas," first published in 1780, mentions "ten lords a-leaping," "eight maids a-milking," "seven swans a-swimming," and "six geese a-laying."

The following particularly amusing quote shows up in the laws of Yale College (1795), quoted from Feagin (1979, p. 116): "If any Scholar shall go a-fishing or sailing, or more than two miles from the College, upon any occasion, without leave from the President, a Professor, or a Tutor, ... he may be fined not exceeding thirty-four cents."