Multiple modals are instances of more than one modal occurring in a single sentence. (Modals are words like can, might, and should that appear before verbs and express properties like possibility, permission, ability, and obligation). Multiple modals are used in many varieties of English in the Southern United States, as exemplified in the following examples that Di Paolo (1989) includes from Texas's Dawson County and Rusk County:

1)  a. I don't think I have any grants you might could apply for.

b. We might can go up there next Saturday.

c. I may could at Finger's.

d. You know, if you drank a half a drink, you might oughta go home and sleep it off.

e. This thing here I might should turn over to Ann.

f. How is it no one might not would notice that but Anne?

g. Well, once we get under way, it shouldn't oughta take us very long.

Multiple modals are widely attested in South Midland and Southern American varieties of English. Examples in the Linguistic Atlas of the Middle and South Atlantic States and the Linguistic Atlas of the Gulf States were collected in areas that span from Florida to West Texas, and (going north) to southern Pennsylvania and New Jersey. Scholars have examined them in more detail in varieties spoken in Alabama (Feagin 1979), North Carolina and South Carolina (Butters 1973, Coleman 1975, Mishoe and Montgomery 1994), Tennessee (Brandstetter 2003, Hasty 2011), Texas (Pampell 1975, Di Paolo et al. 1979, Boertien 1986, Di Paolo 1986, Di Paolo 1989), and West Virginia (Wolfram and Christian 1976). Labov et al. (1968) noticed some multiple modals in African American speakers in New York City, and Di Paolo (1989) in speakers in Utah. Though multiple modals are common across a wide geographical area and are not stigmatized, the literature reports great discrepancies among speakers in the rate in which they use them. 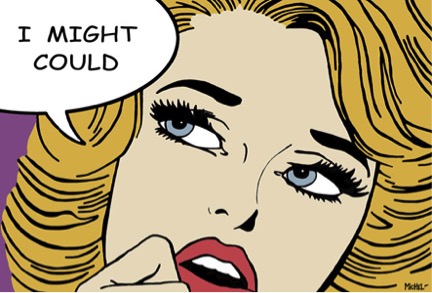 Multiple modals may contain true modals (can, could, may, might, must, ought to, should, will, and would) as well as quasimodal (better, need to, supposed to, and used to) (Di Paolo 1989). However, not all possible combinations of these modals and quasimodals are observed. See Di Paolo (1989, p. 197), Mishoe and Montgomery (1994, p. 9), and Feagin (1979, p. 157) for lists of the multiple modals that the authors observed in Texas, North and South Carolina, and Alabama, respectively.

It is possible for multiple modals to contain more than two modals (hence our usage of the name multiple modals rather than the term double modals that many sources use). The following examples from Mishoe and Montgomery (1994) illustrate three instances of triple modals:

b. I reckon I might should better try to get me a little bit more sleep.

c. Sorry, we don't carry them anymore, but you know, you may might can get one right over there at Wicks.

In questions, it is typically the second modal that moves before the subject of the sentence. For example, in all of the following questions, the italicized modal originated after might and then moved to its current position:

e. What kind of proposal would John might agree to?
(Tennessee, Hasty 2011)

However, the literature reports that it is also possible for both modals to move, at least for some speakers, as shown in (4):

Some works suggest that different combinations of modals yield different results with regard to movement.

In negative clauses, the negative marker (not or n't) is typically found after the second modal, as in the following examples:

b. The mother might should not put a blanket over her baby.
(Texas, Di Paolo 1989)

However, Di Paolo (1989) notes that, in her data, different combinations of modals seem to allow different possibilities for the placement of the negative marker: with might could and might oughta, the negative marker is more often found immediately after might than after the second modal; by contrast, with might should and might would it is more often found immediately after should or would, respectively.

Multiple modals have been used on both scripted and late-night television. The line "Tyrone might could tell you where he's at" was included in season 1, epsidoe 4 of `True Detective', and season 4, episode 2 of `Breaking Bad' included the line "Either way you're gonna wanna practice your draw. A lot. 'Cause if you're all fingers, well it might could be him keeping a piece instead of you, catch my drift?" On a 2012 episode of the Daily Show, then-Senator for South Carolina Jim DeMint said "Let's at least talk about what might could be made better about the private sector, about local communities, about states and keep in Washington what we have to do."

This phenomenon also makes appearances in other media. "I might could" shows up in a painting by Michel Balasis (2007). "I thought you might could get coffee!" is uttered in an Arlo & Janis comic (January 9, 2006).