The So don't I construction is the combination of three components: so; an auxiliary with the negative marker n't; and a subject noun phrase. For example, in the phrase so don't I, the auxiliary is do and the subject noun phrase is I. As Lawler (1974), Gilman (1989) and Wood (2008, 2014) (among others) point out, So don't I has an affirmative meaning. That is, in the following dialogue, Speaker B's utterance means "Yes, and I play basketball too.":

Wood (2014) argues that this construction involves something called "implicature canceling," which is the refutation of an implicature (something implied by an utterance but not explicitly stated in the utterance). In the above example, when speaker A explicitly states that he/she plays basketball, he/she also implies that speaker B does not play basketball. Then, by saying, "So don't I," speaker B asserts that he/she actually does play basketball, contrary to A's implicature. Thus, although So don't I is affirmative, it also has a negative function in that it negates an unspoken assertion. 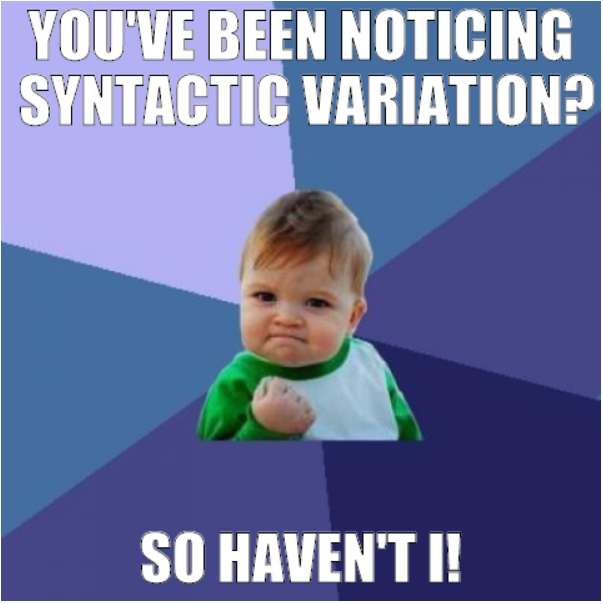 Note: Images on other pages were taken from the web; this one, we made up-- we couldn't resist!

The So don't I, or So Auxn't NP/DP (SAND), construction occurs primarily in Eastern New England. An early example cited in Gilman (1989) is dated January 28, 1962: "I wish I had an orange." "So don't I" (Reynolds, 1962; New York Times Book Review). Labov (1972) notes that the construction was used by young people in place of their parents' So do I in "Maine and surrounding New England."

Pappas (2004) suggests that the usage of this construction is found across both genders (in his survey of New England speakers, about 41% of males surveyed reported using it, and 52% of females did so). He suggests that the northern and southern boundaries of the construction are found at York, ME and New Haven, CT. Adolescents appear to use it more often than older adults.

Lawler (1974) reports the phenomenon in DeKalb County, Illinois. In a posting on Linguist List, Lawler states that many "many early settlers of DeKalb County originated" in New England.

Any subject, any aux

While it is frequently referred to as the So don't I construction, it actually allows almost any auxiliary and many types of subjects. The following are some attested examples from Wood (2014):

2) a. Went here the other night with a girlfriend. Sure it’s trendy, but so aren’t most NYC clubs.

b. I so agree - we do need to let go and laugh and live. And we so need our gal pals - hubbys and kids and other family are essential for most of us, but so aren’t the gals in our lives.

c. Yes, the “Somalis” should be treated with respect but so shouldn’t the Americans.

d. National healthcare would be great, but so wouldn’t everybody actually paying taxes.

In these examples, we see the auxiliaries aren't, shouldn't and wouldn't. We also see a quantified subject (most NYC clubs), two definite subjects (the gals in our lives; the Americans) and even a gerund (everybody actually paying taxes).

3)  a. No swimmers showed up, but neither did any astronauts.

b. * Some swimmers showed up, but so did any astronauts.

In the So don't I construction, NPIs are not acceptable in the subject noun phrase position, despite the presence of the negative element n't. Thus, (4) is not acceptable:

4) * Some swimmers showed up, but so didn't any astronauts.

So don't I is also affirmative in the sense that the sentence it is associated with must also be affirmative. It is just like so do I in this respect. For example, both sentences in (5) are unacceptable because they contain so don't I or so do I affirming a negative sentence:

The following map shows results from a recent nationwide survey. It represents speakers' judgments of the sentence Sure I could help you, but so couldn't my brother, and he's free right now. There is some description of the maps, as well as a key, on the left.