“What we need is we need to help people find work in a legal way.”

Repetition clefts are a type of construction where the subject and verb of a clause are repeated in order to highlight the information they convey. They can take two different forms, shown in sentences (1a) and (1b):

b. He wants a good job is what he wants.

The other form, in (1b), includes the exact same three elements but in reverse order—namely, a complete sentence followed by a form of be followed by a wh-phrase.

Sentences like this are also described as "amalgams" (e.g. by Declerck 1988 and Lambrecht 2001) because they seem to contain amalgamated (that is, overlapping) sentence strings. In sentences (1a) and (1b), the overlapping string is he wants.

Repetition clefts are also referred to as a "pseudoclefts" because they appear very similar to more conventional wh-clefts like (2a) and (2b):

b. A good job is what he wants.

Although the information conveyed is the same, the various types of pseudoclefts serve to highlight different information from the base sentence in (3).

Repetition clefts are quite widespread in English and can be observed as early as the mid-17th century, especially with the verb do (Mair 2013), as in the following example from The Absentee by Maria Edgworth (1812):

4) What you’ll do is, you’ll give up the possession to-morrow to myself.

They are robustly attested in contemporary North American English and are also used in the UK. Related constructions have been observed in Australian English (McConvell 2004) and in a corpus of New Zealand English speech as well (Calude 2008). They are more frequent in speech than in written language, possibly because they do not conform to the standard grammar rules taught in school. Repetition clefts are described as marginal or unacceptable in some of the linguistics literature (e.g., Higgins 1979 and Akmajian 1979), but they are well-attested and accepted by many native speakers. The factors conditioning the dialectal distribution of this construction are unknown, as the usage of repetition clefts does not apparently correlate with any sociodemographic features.

Detailed descriptions of the morphological and syntactic features of repetition clefts can be found in Ross (2000) and O'Neill (2012); key observations from these papers are given below.

Repetition clefts are characterized by three main ingredients: (i) a wh-clause or noun phrase with missing information, similar to an indirect question; (ii) a sentence supplying the missing information; and (iii) a form of be, usually is or was, linking the other two parts.

The wh-word representing the missing information is usually what, but how, why, where, and when are also common. Examples with these different wh-words are shown in (5):

b. How he did it is he did it by calling an expert.

c. Why I'm mad is I'm mad because you never told me you would be late.

d. Where they met is they met at the park.

Speakers vary with respect to which wh-words, other than what, they find acceptable. What is the most typical and the most widely-accepted wh-word in this context; other wh-words may not be acceptable for some speakers. In particular, when the repetition cleft occurs in the wh-initial order, most speakers find who to be slightly unnatural, and which is not possible at all. For example, (5a) and (5b) would sound unnatural to most speakers:

However, when the wh-clause follows is/was, these sentences improve significantly. Thus, (6a) and (6b) would sound much more natural to most speakers:

Repetition clefts can also include phrases with multiple wh-words; in such cases, the clause on the other side of is/was provides a list of paired answers, as in (7):

7)   a. Who ordered what is John ordered steak and Mary (ordered) salad.

b. John ordered steak and Mary (ordered) salad is who ordered what.

The clause with the missing information usually has the form of a main/independent clause. When it comes after is/was, it may in some environments be introduced by that, but speakers generally prefer the that-less version. For example, the sentence in (8) is marginally acceptable when it contains that but is completely acceptable without that:

However, when the clause precedes is/was, it is universally unacceptable to have it begin with that, as in (9):

Although the clause does not usually include that, suggesting that it is like an independent clause in structure, it also resembles a dependent clause in some ways. For instance, it is sometimes possible to invert the subject and the verb in a main clause, such as when the sentence begins with a quote or a prepositional phrase like down the hill. Examples of this sort of inversion are given in (10):

10)  a. Down the hill rolled the baby carriage.

However, dependent clauses do not allow this kind of inversion, as illustrated by the fact that the sentences in (11) are unacceptable:

Like dependent clauses, the clause that specifies the missing information in an repetition cleft does not allow subject-verb inversion, as illustrated by the fact that the sentences in (12) are ungrammatical:

The phrase supplying the missing information is strongly focused. This focused phrase may be of any syntactic category (verb, noun, adjective, etc.), and may have almost any grammatical role. (13) illustrates several examples of different types of focused phrases, indicated inside brackets (capital letters indicate stress):

b. I yelled [because I was MAD] is why I yelled.

The form of be in an repetition cleft can always have the form is and may optionally occur as was in the environment of another past tense verb form.

Note that sentences that exhibit the same basic properties of repetition clefts (namely, a clause with missing information which is "answered" by a main clause) can be formed even without repeating words. For example, (15a) and (15b) are very similar to (4b) and (4c), respectively:

b. Why I'm mad is you never told me you'd be late.

Sentences like (15a) and (15b) are also included in the repetition cleft construction despite the lack of repeated components.

The linear order of the two main phrases is generally reversible, as in sentences (1a) and (1b). However, as discussed above, the order with the wh-phrase after is allows more wh-words than the wh-initial order. Specifically, who and which are generally unacceptable in the wh-initial order but are acceptable when the wh-phrase occurs after the be verb.

This contrasts with other kinds of clefts and pseudoclefts, in which the be verb form may be negated, as in sentences (17a) and (17b):

Repetition clefts cannot undergo subject-auxiliary inversion, where the auxiliary moves before the subject of the sentence (the initial clause, indicated in square brackets). For example, (18b) and (19b) (which derive from the repetition clefts in (18a) and (19a)) would both be unacceptable:

This is another feature that differentiates repetition clefts from other kinds of clefts and pseudoclefts — non-repetition clefts may undergo question formation through subject-auxiliary inversion as in the following examples:

The be form of a repetition cleft is restricted in terms of what tense morphology it may have: it generally occurs only in a simple form as is or was. Tense matching between is/was and the main verb in other phrases is not obligatory—it may remain in present tense form in any environment, and it may optionally take the past tense form was if the main verb in the other phrases is in the past tense. For example, (22a) is acceptable with either is or was, but (22b) is only acceptable with is:

b. What he needs {is/*was} he needs a vacation.

b. What he needs {%might be/*will be/*has been} he needs a vacation. 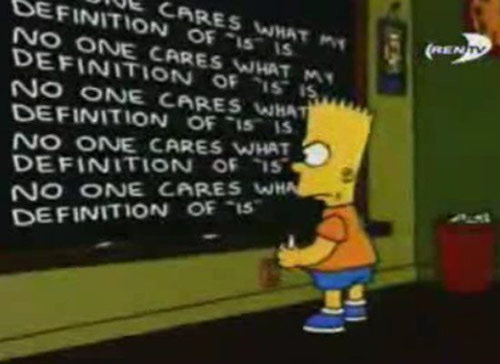 Repetition and non-repetition clefts can be embedded as dependent clauses under a very limited set of verbs called bridge verbs, including say and think. For example, (24a) and (24b) are both acceptable:

b. He regretted that (*he had) a book was what he had.

It is impossible for repetition clefts to occur in non-finite clauses. For example, (26a) and (27a) are unacceptable. However, the same is not true for non-repetition clefts, as in (26b) and (27b):

b. I believe what he read to be my book.

b. I believe my book to be what he read.

Some linguists have proposed that repetition clefts are self-answering questions, as though the speaker is asking a question and answering it in the same sentence (den Dikken et al. 2000; Schlenker 2003; Lambrecht and Ross-Hagebaum 2006; Caponigro and Davidson 2011). Some of these authors observe that the “question” phrase serves as a “topic,” something either mentioned or hinted at in a discourse as being of current relevance to the conversation. These proposals do not always analyze the sentence structure in detail.

However, O'Neill (2012) proposes that repetition clefts have a structure comparable to coordination, where the word is serves a grammatical function similar to words like and or or.

Several other syntactic phenomena resemble repetition clefts. In particular, there are several phenomena that appear to use copulas in non-standard ways and/or to have finite clauses as the subjects of sentences. First, there is the that's X is Y construction illustrated in (31):

31) That’s what I was about to say is that everyone needs to be tested.

Secondly, there are question-answer sentences such as (32):

Thirdly, there are sentences such as (33) that also appear to have an extra instance of is:

33) Anne has the same problems with her anxieties is that she wakes up in the night.

Finally, there is the double-IS construction shown in (34):

34) But what is also important for us to understand is, is that for America to be successful in this region there are some things that we're going to have to do here at home as well.